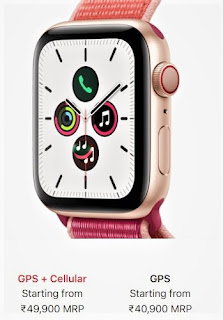 The Apple watch series 5 is an update to the last version series. This time apple is launching Watch series 5 in ceramic and titanium finishes coated with aluminium or stainless steel body.  Aluminum models come in silver, gold and space gray. Meanwhile, Stainless steel models come in gold and space black, The size of Watch is 44mm and 40mm.The change in this version is always-on-display. You can always see the time without touching or making any actions with the watch.

The watch 5 series has new version of second generation Heart-rate sensor which will alert you when your heart rate gets low, It also gives the ECG data. The watch runs on the latest Watch OS 6. You will receive calls, messages and other things from the phone. You can make a call if you buy the LTE version. You can listen Music by subscribing the Apple music. It has loud speaker so that you can communicate with the watch. You will get all the exercise modes. 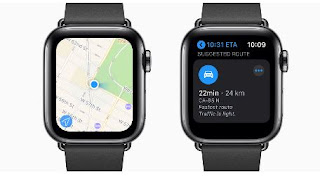 The Watch has a thickness of 10.7mm, which is less than the older variant. The sensor used to monitor  heart rate is replaced with second generation. You will get compass, haptic feedback and fall detection option. where Fall detection will alert you if you are moving the watch towards anything, so you can protect it. To Process this Apple used the S5 with 64-bit Dual-core processor, where claims that it is faster than the older version at 2x speed. The display of the watch is LPTO OLED always on display. It protects from water at 50 meters.

In this watch you will get the LTE version and non LTE version with Bluetooth v5.0 and WI-FI 802.11b/g/n. You will get all the basic sensors like compass, accelerometer, Speakers, MIC, Barometer, ambient light sensor and storage capacity of 32GB in both the models. Both the watch has a Inbuilt GPS/GLONASS, Galileo and QZSS sensors. There is also an SOS emergency call mode, which is used when you are in a trouble.  Here you will get a W3 wireless chip, it is an upgrade to W2 chip version. 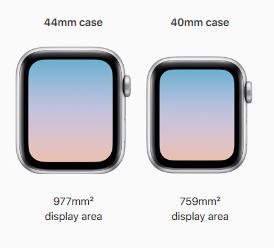 Apple said that you will get 18 hours battery backup. Apple has used a rechargeable Lithium-ion Battery. The battery backup is same as the older version. To charge this you will get Magnetic charging cable with a USB Power Adaptor.