Skip to content
Huawei has launched the Mate 30 and Mate 30 Pro. Due to trade war between US-China , Huawei on pressure revealed plan for the next smartphones without Google. Huawei is the worlds largest network equipment manufacturer company in  the world and 2nd smartphone maker too. But, they are failed to get Android, lets see what they have found the alternative of the Google apps. 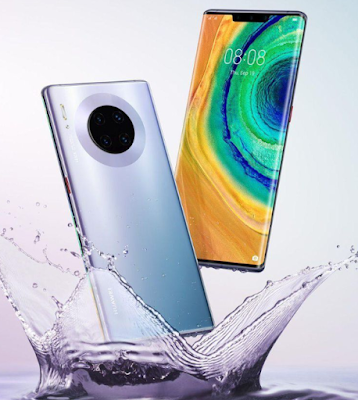 The company has tried to give every premium feature in this phone. In Mate 30 Pro you get a glass back and quad rear camera setup. The design of the phone is excellent and it will be found in green, lavender, black and crystal colors. There is also a Volume Up-down keys, so which are not visible. There is one button on the left side to volume up, so you have tap and scroll up and to volume down on right side you to click and scroll down.
The Mate 30 Pro has 6.53 inch Full HD + OLED display. Huawei calls it Horizon display, the display is with 1176 x 2400 resolution, HDR support and full coverage of DCI-P3 color gamut. It has always on mode and supports the M-Pen stylus of the Huawei, which can sense 4096 levels of pressure.
It get a 8GB RAM and 256GB storage. It will run on EMUI based like Android 10(unlicensed). But you will not find Google apps in it. Apart from this, the phone will get many features such as 3D face unlock, IP-68 Water and Dust Resistance, 4,500 mAh Battery and wireless Super Charger of 27W and 40W wired charging option. The phone is powered by the Kirin 990 processor at 2.85 Ghz and the GPU is Mali-G76 MP10, which is the powerfull GPU manufactured until now from Mali.

The Huawei Mate 30 Pro has the most impressive camera hardware in any smartphone ever. The Primary camera is of 40 MP f/1.6 aperture Super Sensing lens, a 40 MP ultra wide camera with f/1.8 aperture. Huawei has called the wide camera as cine camera. Both the sensors are quite large in physical and both can use 3D ToF sensor for bokeh effects. The size of the camera are more than one inch in size. This both camera has Optical Image Stabilization (OIS)
The Third camera on back is 8 MP with 5x optical zoom and 10x Hybrid zoom. The ToF camera is paired with primary camera. Coming to features of the camera. This phone supports 4K video recording at 60 FOS and super slow motion video at 960 FPS at Full HD(1080p) resolution. The camera has wizardry software and using that you can record 7680 FPS ultra slow motion video, but it is capped to 720p. It has night mode and love bokeh options and many other camera options.
There is 32 MP front shooter for selfies with inbuilt 3D face scanning hardware. There is dedicated sensor for hand gesture, which works with Huawei In-house Da Vinci NPU. It sensors the head moment for auto rotation instead of depending on the accelerometer.
Connectivity options available are NFC, GPS, WI-FI 802.11b/g/n, 3G, 4G And Type-C charging option. The sensors are accelerometer , In-Display fingerprint scanner, Face unlock with dedicated hardware, gyroscope, compass and proximity sensor. The weight of device is 199 grams. There is also a 5G variant of the Mate 30 Pro.
The 5G version comes with 21 Antennas. In which 14 are dedicated to the 5G network. It means Huawei is boosting the 5G speed and doesnot want to take a chance. The Samsung 5G phone has only 3 antennas for 5G.

The Mate 30 has the same features the Pro version with slight differences like the Notch is smaller in this phone, The display is same as the Pro version, the Color options are same. It also has the same Kirin 990 Processor clocked at 2.85 Ghz and Mali-G76 MP 10 GPU. In this processor the NPU has  Only one Big core instead of 2.
There is difference in the camera department, however the primary camera of 40 MP is same and also the 8 MP camera. But the optical is zoom is 3x and it has 5x hybrid zoom and both has OIS support. The other camera is 16 MP ultra wide lens while Pro has 40 MP lens. The features are same as the Pro variant. The selfie camera is also changed to 24 MP instead of 32 MP lens in the Pro version.

The battery capacity of Mate 30 is 4.200 mAh and it supports wireless 27W and 40W chargers. There is IP-53 rating for splash proof. The phones comes with 8 GB RAM and 128 GB internal storage which can be Upgraded with Micro-SD card.
Price :
The Mate 30 is launched at a price of 800 Euros for 8 GB and 128 GB version. There is no 5G version in this Phone.

Because Huawei is not using any Google apps like play store, google search and etc… What comes in Mind is how to load the apps?

Huawei has a solution. Huawei has used the Huawei App Gallery App which comes with all the major Apps available on the play store and other Apps stores. Huawei has recently invested dollars in the Apps development for their devices and App store. Huawei is helping out the App developers to design the apps for their devices. There is the only issue In Huawei  is the security.

There are many reasons to not trust the huawei when we see the cases against the company. Bu, I think they will not leave a point in security in coming days. Huawei is the worlds 2nd largest smartphone company and they don’t want to loose this position.