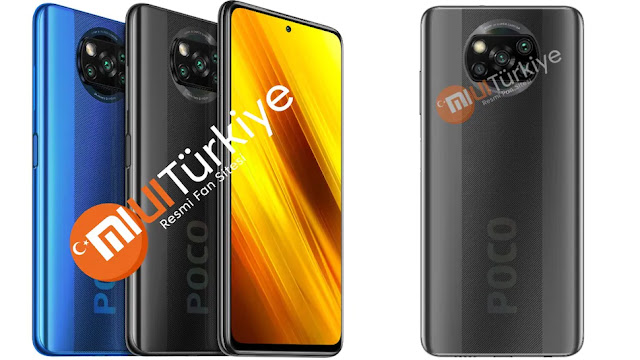 Poco X3, the rumoured successor to the Poco X2 launched in February, has leaked online. Official-looking renders and specifications of the phone have surfaced, along with a probable launch date. The Poco X3 is reported to launch on September 8, and given that the leak has surfaced on the Mi Turkey forums, it could mean that the launch is set for that region. There is no clarity on that matter; however, the renders suggest the Poco X3 may sport a quad-camera setup at the back and a hole-punch display upfront.

Tipster Ishan Agarwal spotted this Poco X3 leak on Mi Turkey forums that has now been deleted. Agarwal was able to source the renders and specifications before the leak was removed. The leak suggests that the Poco X3 may be unveiled on September 8. The phone renders hint at a hole-punch display upfront with the cut out placed in the top centre. There’s a slight chin that is noticed at the bottom of the display. The image leak indicates that the Poco X3 may have a side-mounted fingerprint scanner and that the phone may come in Blue and Black gradient finishes.

At the back, the Poco X3 is reported to pack a quad-camera setup inside a semi-curved rectangular-shaped camera module. The script written around the camera module suggests a 64-megapixel main camera onboard.

As for specifications, the tipster leaks that the Poco X3 features a 6.67-inch 120Hz display with 240Hz touch latency. The phone is reported to be powered by the Qualcomm Snapdragon 732 Soc. As mentioned, the Poco X3 is tipped to sport a 64-megapixel quad camera setup. Upfront, the handset is expected to sport a 20-megapixel front sensor. The Poco X3 phone is reported to pack a large 5,160mAh battery with 33W fast charging.

As mentioned, Poco X3 is likely the successor of the Poco X2 that was unveiled in India in February. Given the leaked specifications, the Poco X3 may see an upgrade in processor and battery capacity. The Poco X2 had a dual selfie camera setup, whereas this leak suggests a single selfie camera on the successor. More details should be unveiled in the run-up to the launch.

All the different design possibilities teased by the Poco executive show a device with a quad-camera setup. They also broadly match what we previously saw in an FCC listing of the device. Leaked specs covered in the original article below suggest that the Poco X3 will get four cameras at the back, led by a 64MP sensor.

If the report is accurate, the Xiaomi-owned brand would launch the Poco X3 on September 8.  The pricing is still unknown, but the X2 sold for an equivalent price under $300 in India. We’d expect aggressive pricing for the X3 as well, although there are no guarantees it will remain just as affordable. This will be an important phone for Poco regardless of the exact cost. The X3 is unofficially poised to be a direct rival to the One Plus Nord. Its processor wouldn’t stack up well against the Snapdragon 765G in the Nord, but it would have a faster display and a larger battery. You might have a tough purchasing decision ahead if you’re in a market where both devices are available.