Huawei has recently patented a new smartphone, with a unique rear camera module. On the back, a 5 camera setup can be observed while the front features an under screen selfie shooter.

A new report from LetsGoDigital found that the Chinese tech giant filed for the design patents with the CNIPA (China National Intellectual Property Administration). Looking at the patent, a smartphone is described with a penta camera setup. The patent also contains 24 product sketches and was published earlier today (11th September 2020). The overall design of the smartphone is quite futuristic as well.

In the patent, three variants of this smartphone have been detailed. The different iterations have the rear camera module placed in varying spots on the back. One has the 5 camera setup set in the middle, with the other two having it on the top left and top right respectively. Notably, the camera module itself is quite unique with a hexagonal shape on which all 5 cutouts being of a similar size for the image sensors alongside an LED flash. 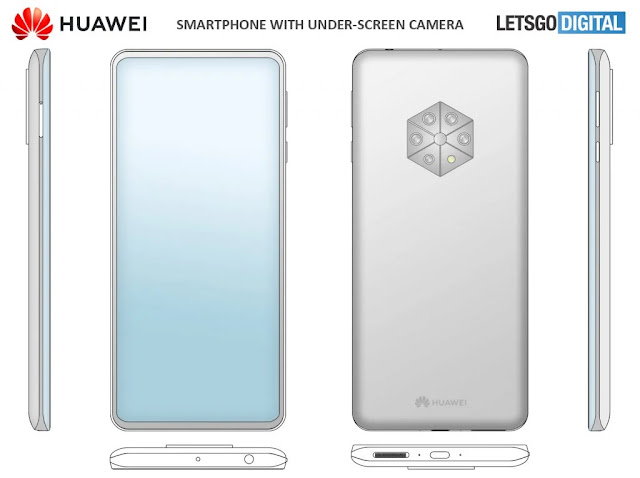 On the left, the device is completely bare, while the right houses the volume rockers and power button as well. The bottom has a USB Type C charging port flanked by a lone speaker grill while the top features a 3.5mm headphone jack and a microphone. Unfortunately, it is unknown if Huawei is actually planning on developing this device or whether it is just covering all bases.